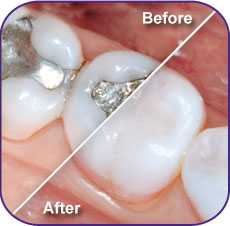 White fillings, also known as tooth-colored fillings or composite resin, are dental fillings whose appearance is similar to that of natural teeth. They are used when you still want your teeth to look as natural as possible even after a cavity is filled.

Besides their use in restoring fractured and decayed teeth, white fillings are also used for cosmetic procedures such as changing the size, shape or color of teeth. This is because of their natural appearance. Such cosmetic procedures include: closing a gap in between teeth, restoring the full appearance of a chipped tooth and making teeth appear more even.

White fillings have the following advantages over other types of fillings: 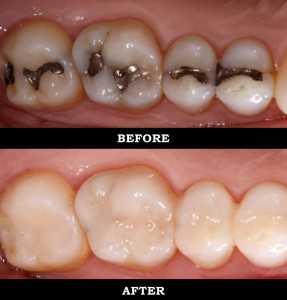 How white fillings are placed

Since white fillings are placed by chemically bonding them to teeth, the procedure does not require the use of anesthesia, unless there’s extensive decay that has progressed to areas beneath the enamel and into areas surrounding the nerves.

In case you have a decayed tooth, the decay is first removed, then the tooth is cleaned and primed using a weak acid in order to open the pores in the enamel and the dentin. The open pores are then flowed with a bonding agent, which is cured to allow it to bond to the white filling.

The white filling is then applied to the cured bonding agent, shaped and contoured and finally hardened using a special curing light.

Your dentist will check the filling to ensure you have proper bite and to confirm that the filling has not sealed the space between your teeth such that it will prevent you from flossing. The filling is then smoothed and polished.

What are the alternatives for white fillings?

Dentist use porcelain inlays in place of white fillings to give a more durable restoration. The disadvantage of inlays, however is that they cost a lot more money and are installed over multiple procedures. This leaves white fillings as a great option when you want results that will last for 10 to 15 years without costing too much money.

We are proud to announce that we are now part of Smile Design NOVA.

Dr. Ngo and his entire team are ready to give you the same great care we always have.